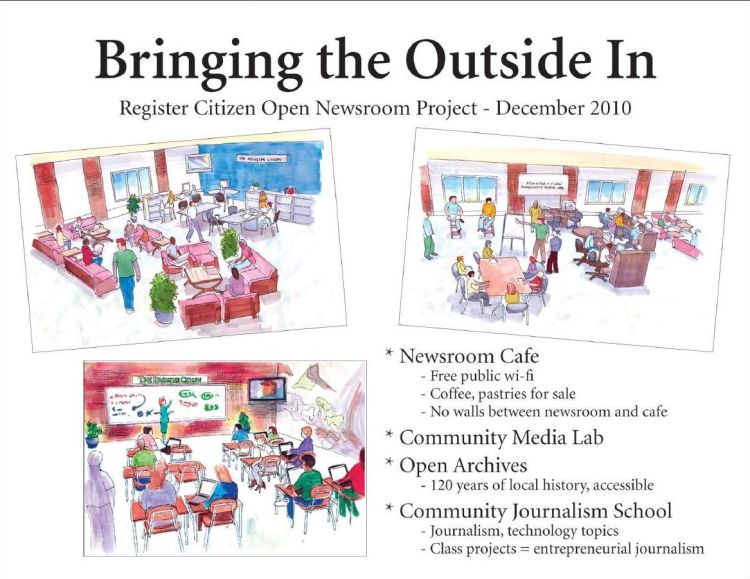 What does a “digital first, print last” newsroom look like?

I’m pleased, following months of work and planning behind the scenes, to be able to share with you this announcement from Journal Register Company. After 110 years in (literally) our ink-stained, print edition-focused building in Torrington, Connecticut, The Register Citizen is moving to new offices that reflect how much our business model has changed.

The centerpiece is a Newsroom Cafe, with no walls separating the public from reporters and editors. Incorporated into the space is also a Community Media Lab, the opening of 120 years of newspaper archives for easy and free public access, and the creation of a Community Journalism School.

Read our local story about the move here, or for more about the whole project, visit RegisterCitizen.com/newsroomcafe.

And for an excellent, comprehensive overview of how we got to this point, see Journal Register Company CEO John Paton’s amazing presentation today to the INMA Transformation of News Summit at Harvard.

Matt DeRienzo has worked in journalism for more than 25 years as a reporter, editor, publisher, director of news and journalism nonprofit executive director. As vice president of news at Hearst Connecticut, he led a newsroom of more than 175 people, instilling a culture of investigative reporting, and growing audience while launching a paid digital subscription model at six daily newspapers. While there, he oversaw a national investigation into sex abuse at Boys & Girls Clubs that was recently recognized with an Investigative Reporters & Editors (IRE) national award, as well as the New England First Amendment Coalition’s Michael Donoghue Freedom of Information Award. As the first full-time executive director of LION, a nonprofit supporting local independent online news organizations across the country, he started with an annual budget of $30,000 and helped bring in more than $2 million over three years from funders including the Knight Foundation, Ford Foundation, Democracy Fund, Inasmuch Foundation (Ethics & Excellence in Journalism), and Facebook, while tripling the organization’s membership. As a publisher, he was an early leader in reader and community engagement, launching North America’s first “newsroom café,” which opened a Connecticut daily newspaper’s doors to the public, and which was recognized with the Associated Press Managing Editors’ Innovator of the Year Award. As editor of the New Haven Register, he led a team of more than 100 journalists borrowed from around the country and on his own staff in covering the mass murder at Sandy Hook Elementary School and its aftermath. During his tenure in New Haven, the Register also received the Robert C. McGruder Award for Leadership in Newsroom Diversity from the American Society of Newspaper Editors. Most recently, he has done consulting work for Local Media Association on fundraising from foundations and individual giving in support of local news organizations. He co-managed the Facebook Journalism Project’s recent COVID-19 Relief grant program, which received more than 2,000 applications and is part of $25 million in funding Facebook has earmarked to help local news organizations through this crisis. He was a Sulzberger fellow at Columbia University in 2018, and has taught reporting, editing and multimedia journalism as an adjunct professor at the University of New Haven and Quinnipiac University. His column about the journalism industry has appeared in Editor & Publisher magazine since January 2016. He is a full-time single dad of two who has been active in Northwest Connecticut as a board member of the Susan B. Anthony Project, a domestic and sexual violence support and advocacy, and previously as a longtime United Way board member and two-time annual fund chairman. View more posts

2 thoughts on “Bringing the Outside In: Newsroom Cafe and more in Torrington, Connecticut”